"The moment they saw Him they worshiped Him. Some, though, held back, not sure about worship, about risking themselves totally."  (Matt 28:17)

In light of the Easter season upon us, I've been reading the accounts of both Jesus' death and resurrection.  Jesus has risen from the dead, presented Himself to Mary and several other women, and now the 11 disciples see Him face-to-face, and the above statement is how the Message records their response.

Of course, we know that wasn't the end of the story and that Jesus' death was intentional, prophetic, and even powerful as it served as the required sacrifice needed to cover the payment for sin, once and for all, to restore us back to Him.  That His resurrection brought the power to bring life into what is dead. 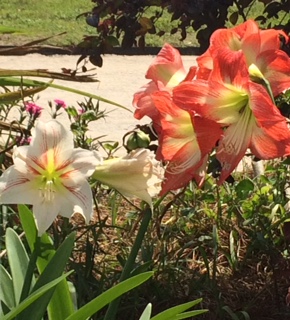 But imagine having given up everything to follow Jesus only to watch the religious people who had given up nothing and challenged His divinity have Him killed.  And instead of defending Himself or God, He suffers a brutal death right along with common criminals and goes into a grave, leaving them abandoned and scared.  Disappointment doesn't seem to capture how I imagine those who had risked everything for Jesus must have felt.

But the disciples had a choice: to give themselves back to Jesus with reverence, obedience, and respect or to keep their distance because of doubt.   The original Greek is to waver, the same word when Peter started walking on water but then fell.

I wonder where you or I have been disappointed by Jesus.  We may deny such a thought because we know that Jesus doesn't disappoint, but our own expectations of who we expect Jesus to be and what He should do for us certainly can just like they did for His disciples when He walked the earth.  And so when He tells us to "meet Him in Galilee" so to speak, to trust Him again, we have that same choice.  Will we offer ourselves to Him as our worship, or will we waver because we're trusting in our own abilities or simply don't want to risk being disappointed again?

Perhaps it would help us to remember that Jesus doesn't empower us for our own individual comfort and success in life, that our following Him isn't for us alone.  This whole scene is actually the background for the Great Commission where Jesus' next move is to verbally transfer His own power and responsibility to carry God's salvation plan to those who follow after Him as His disciples.  So I think it's worth contemplating these things and considering if our God who gave up His very life is willing to trust us with this crucial role, will we trust Him in our everyday lives as well as with this call?

I was asked to speak at an event this past weekend for homeschooling parents about evangelizing teenagers.   Since far too much time has passed since my own high school years, my only "qualifications" are that I taught teenagers the past 3 years and have a teenage nephew.  Clearly not the expert!  But since the starting point that we teach in XEE is to connect and relate to others, it seemed like a good place to start is to consider the teenage life and mind.

One point we talked about is that many teens, whether they've grown up in church or not, may not recognize their need for Jesus.  And I'd say this is not limited to teenagers, but could hold true for all ages and all cultures. It's something I have encountered with Europeans, particularly the French who pride themselves in secularism.  Perhaps it's because Jesus is associated with the Church and religion, which hasn't always prevailed in the teachings of Jesus.  Perhaps it's because many associate Him with a 2000+-year old historical figure that has zero relevance to the 21st century.


That's where I get hopeful and even excited because as the approaching Easter season is supposed to remind us, Jesus is alive and oh-so-relevant.  A teen (or anyone) may deny their need for Jesus, but they may be better able to acknowledge their need for emotional or physical healing.  Because Jesus is Healer, He heals emotions, bodies, and spirits.  So, actually who Jesus is and what He does meets their needs after all.  Perhaps they need counsel for a tough decision or relationship or even counseling to help through some pain or confusion.  Jesus is the Wonderful Counselor.  Maybe they live with loneliness and just need a friend.  Jesus is Friend.  In fact, He befriended the outcasts, despised, and "bad people" most of the time!  Or they may need someone who can stick around after dealing with a failed friendship, relationship, or even parent who has left.  Jesus is the Faithful One. 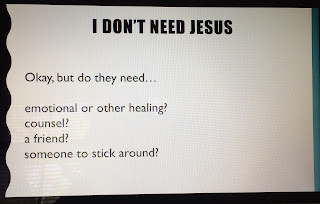 The point is as humans--teen or not--we may not think we need Jesus when in actuality, that's exactly who we need.  We just don't know it because we've relegated Him to a figure from an ancient text rather than the God-With-Us, one of His other names.  The reality is that His Holy Spirit lives inside of those who do recognize their need for Jesus; so we have access to Him directly but also through others who are filled with His Spirit!


Perhaps a real challenge is first getting to know Jesus in the fullness of who He is for ourselves so that we can share Him with others.  Then the Gospel is more than an awkward conversation, but the Good News that it truly is: Jesus did die over 2000 years ago to pay the price for every wrong thing we and others have done.  But now Jesus is alive and relates to us right where we are to restore us back to the One who created us to be whole and fulfilled.

Jesus does meet our needs emotionally, physically, and spiritually.  Right here, right now, and one day forever.  Let's recognize the real need for Jesus that is there for all life stages because of our common human state; and let's share Him with others.  We all need Jesus.
Posted by Follow Anne's Adventures at 6:06 PM