In case you're unaware, today is World Refugee Day, with the purpose to raise awareness about the global crisis of refugees as well as to encourage advocacy and helping those in need.  Unfortunately, the word "refugee" has become more of a political term and stirs up heated emotions, which sometimes diverts from the true issue at hand: millions (over 65!) of people are living in such hostile, desperate, or un-livable conditions that they must leave their homelands.

Interestingly, it's the poorer and less developed countries who welcome the most.  Maybe because they know what it feels like?  I can't imagine...  On several occasions, I've chosen to leave my homeland.  It hasn't been easy, but I've always had the choice, as well as the choice to return.  I'm so blessed and thankful to have been born in a nation that values freedom.

While the intolerance and brutalities are atrocious, we often don't have to look far to see how God can bring something good out of a bad situation.  Since EE works directly with churches, I've gotten to glimpse some of the ways that the Church in Europe has responded to the situation.  One of our leaders is a pastor who has outreaches for many, including refugees to Switzerland.  Another attends a church that welcomes refugees and was able to befriend an Iraqi who wanted to "know God."  And despite the poverty and effects of war, the workers in Ukraine reach out to the Crimean Tatar refugees.

This is another reason that evangelism, in my opinion, is so important in Europe right now. For the Europeans, yes, but also for those who have come from countries with no other Christian witness!  It's amazing that such an unfortunate and tragic situation has actually created opportunity for people from closed countries (not open to the Gospel) to go to open countries where they are able to hear the Gospel.

It encourages me to see the Church respond because as Christians, we adore and worship the God whose Gospel--or good message that He put into action--is "the power of God for salvation..." (Rom 15:1).  This word salvation does apply to a future salvation from damnation, thank God; but its primary definition from the Greek is "deliverance, preservation, safety, salvation" and "deliverance from the molestation from enemies."* Since a refugee is "a person who has been forced to flee their country in order to escape war, persecution, or natural disaster" (Oxford Dictionary), by definition, they are ripe for God's gracious gift of salvation.

It helps, though humbles me, to remember the rest of this verse, that this gift of salvation is "to everyone who believes, to the Jew first, and also to the Greek" because it reminds me that I myself should be an outsider of God's kingdom.  It's by His sheer grace and act of love that I get to be included because He's a God who has rescued me from danger.

As the Church prays for God's "kingdom to come, [His] will to be done," may we embrace the doors of opportunity to bring His kingdom to earth and participate with Him in this crisis of a situation, not just for the refugees, but for the nations who are trying to help.

This morning is the first time I've joined the monthly VP calls.  Thankfully I'm on Eastern Standard Time and got to start at 8AM instead of midnight like those in Fiji did!  I set up my computer on my window seat, which gives me an immediate view of the magnolia tree right outside my room.  I love this time of year watching the magnolias bloom, but I learned something new today: they open up very quickly...or at least this one did! 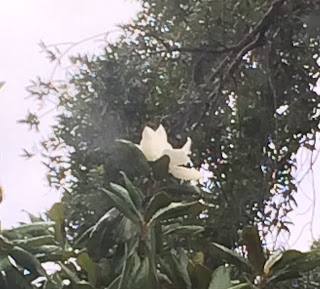 In the course of an hour, I watched this flower which had only slighted budded open into full bloom! Perhaps the rain sped things up, but I really couldn't believe my eyes.  And I suppose it was quite appropriate as the VP's and leadership team were reviewing plans and resources to help assist national directors with their growing countries.  Obviously, not everything in life will develop or grow as speedily as the magnolia outside my window, but there are conditions and care that will facilitate growth.

On a more somber note, it also reminds me that everything on earth is temporary, relatively speaking.  Whether you tune into the news or just get out of bed, death haunts us in literal and metaphorical forms, confronting us at times with uncertainties and unpredictability. This morning's magnolia almost puts action to this sober reality that is confirmed in the book of Isaiah: "The grass withers, the flower fades..." reinforcing the need to bring the Good News to every person.

Thankfully, when Christ is our Lord and our source of Hope and true Life, we have security and stability that people, things, and plans of this world are unable to offer us.  And while death is a reality, it isn't final.  Jesus has power to resurrect.  He gets the last word.  To complete the sentence, "The grass withers, the flower fades, but the Word of our God will stand forever." (Isaiah 40:8)